As a father I’ve watched some kids shows and generally they are based on worlds that make little sense. But there is one show that has an internal logic and attention to detail that is very compelling and that is Bing.

If you haven’t seen it here’s a summary of the basic plot: Bing is a humanoid rabbit living with his care taker Flop. Bing is a child that does normal things like playing with friends, going to the park, etc. Stories are based on a formula of some kind of conflict or problem that gets resolved. Flop has a parenting style of letting Bing make mistakes so he can learn from them but he does help as much as is needed.

So far, so ordinary. Just beyond these ordinary facts lies some other intriguing details. The first thing you’ll notice is that Flop is small compared to Bing (Flop is the one to the right, Bing to the left):

So that’s weird. And you might think this is just how Bing sees the world but no, Flop regularly needs to use a stool to even get up to the dinner table and they even talk about the height difference quite explicitly in one episode. Now the second thing you should notice is that, while Bing is a rabbit, Flop is just vaguely shaped like one while being made of a very rough fabric. Even the stitches are quite visible!

It’s not just Bing’s care taker that is small and obviously synthetic though, it’s all adults. The oldest person who is biological that you ever see is another rabbit character that is in her early teens at most.

Which brings me to another detail: all biological sentient beings are easily countable. There are five of them. Five. In the entire city. There are birds, insects, frogs, trees, grass etc but everyone that speaks is either synthetic or one of those five. All “extras” you see in the background are always synthetics. 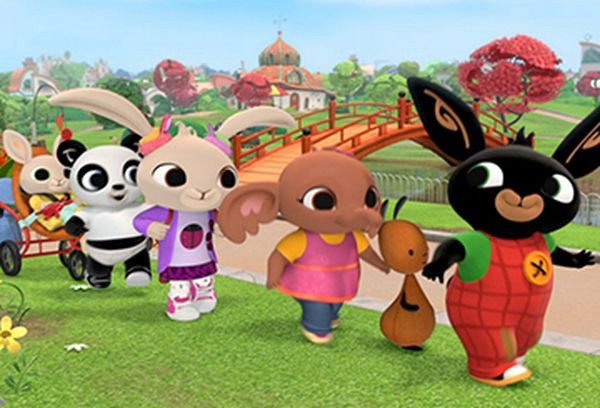 This picture shows the entire biological sentient population (plus two care takers, the blue one at the far left is shaped like an elephant).

The synthetic beings do all the work, they are all adults and the entire world is blatantly built to be too big for them. Cars are so big their drivers almost can’t see over the steering wheel. Kitchen counters are so high the adults can’t even see what’s on them.

Me and my wife have discussed and rejected quite a few scenarios. We where leaning on some kind of The Matrix explanation a while but that doesn’t really make sense when you see more of the episodes and notice more of the facts I’ve spelled out above.

So what is going on? I think the evidence strongly points to one thing and one thing only: these five biological sentient beings are the first round in the seeding of the civilization of a newly terraformed world. The care takers are AIs, robots in a very basic disguise. It’s basically this: 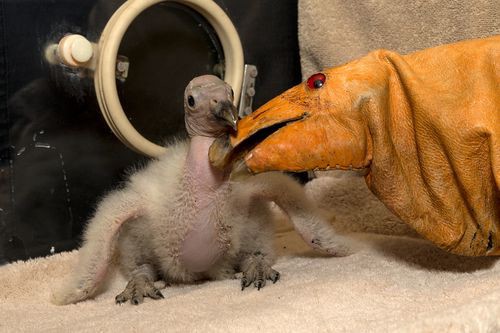 This is an image of a condor chick being raised at the San Diego Zoo. One biological, one synthetic just like the first image in this article.

(The machines have made a weird choice to introduce humans that basically look like rabbits, elephants and pandas though. Or maybe it’s uplifted versions of those species, but that’s probably harder to do.)

So there you have it. Hopefully you can now watch this show with your kids with renewed interest!